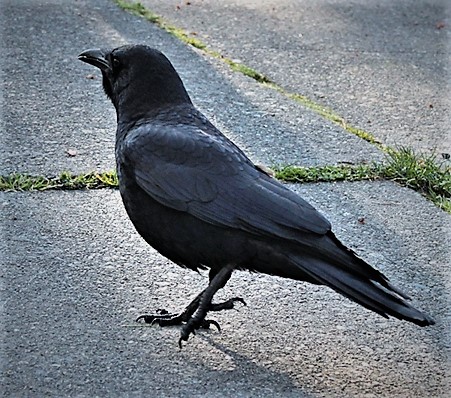 this morning, I am the attendee
of another crow funeral

the fourth such curated cacophony
close followed by hushful reverence

yet this is only something eventual
finally becoming true

while elsewhere, the crickets
rasp hymns to the rain

Anyone who has followed this poetry blog for any length of time knows that I have been accepted by a very special family of crows. For the past 9 years, they have been clownish companions who visit me on the porch, caw through my window to get my attention, introduce their young to me, and tag along on walks with the dogs. I have had to warn any dog sitters coming in that the crows recognize my dogs and will want to walk with them even when I’m not there. I have been entertained, enchanted, and delighted by them – even when they steal my lighter and drop chicken bones on my head (I think that’s a gift?).

This morning the family lost one of this year’s young – hit by a car while I was on my way to work. This is the fourth crow funeral I have witnessed, but the first I have seen from start to finish. While I would have much preferred to have a different start to my Friday, it at the very least serves as a reminder that animals are as capable of close connection and of mourning as we are. 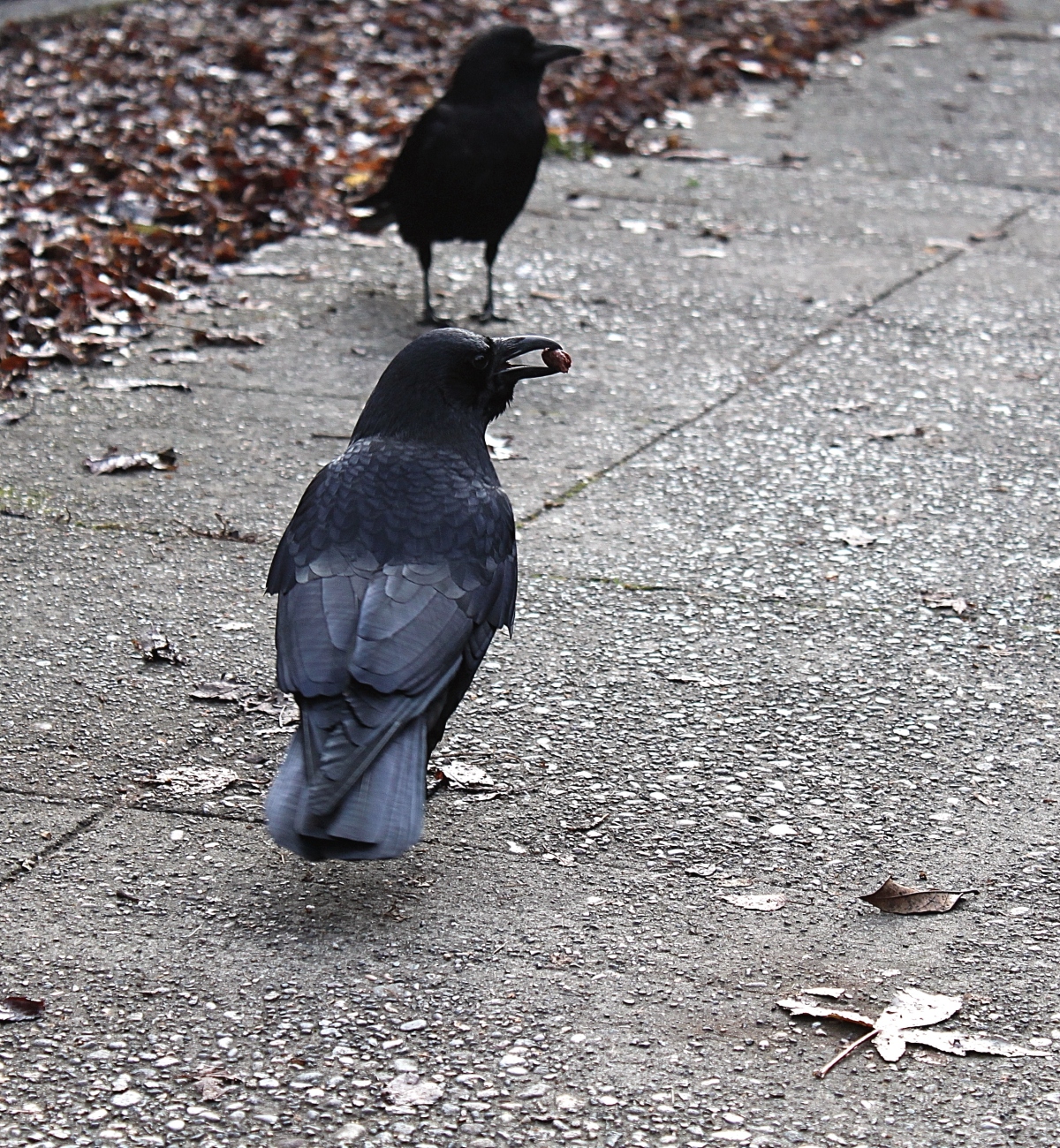 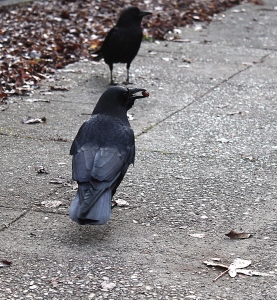 It’s been a while since I’ve done one of these and perhaps it’s overdue?

Coyote and his mate (now called Magda) had no surviving offspring from the spring’s hatch. There’s really no telling what happened but I noticed more hawks than usual in the neighborhood, so that may very well be it. Of course, we have raccoons as well, who will think nothing of eating crow eggs, or even hatchlings.

We’re headed into the gathering time for the winter roost, and so I’ve got several crows who come along on walks with the dogs currently. But the two that are most present right now are Coyote and Knock-Knock. And it has been my pleasure most weekends to spend some time sitting on the porch with both of them. Coyote especially sits quite close on the porch railing and seems to like to hold a “conversation” with me. I keep trying to capture the little chortling and deep guttural noises he makes at me on camera – he makes them from deep in his throat and actually bends his neck so that his beak is nearly on his chest when he does the gutterals. I’m determined to get that on video one of these days!

I’ve been sitting out on the porch with the laptop, getting ready for NaNoWriMo and diving headfirst into research. I’ve noticed that if I’m not paying enough attention to Coyote, he will very boldly walk up along the railing behind me and knock his beak against the wood very loudly. The first time he did it, he startled the you-know-what out of me as I hadn’t even realized he was there.

Coyote has also started to show an interest in the toys Freyja brings outside with her. Yesterday, he tugged her blue stuffed dog across the parking lot while Freyja looked on. She didn’t seem too concerned that a crow was inspecting her toy – she’s so used to them now.

I never tire of these strange “friends” and their antics. I don’t even mind the occasional loss of a swiped lighter if it means I get to continue to observe them from perhaps just a little closer than most people have the opportunity to do so. 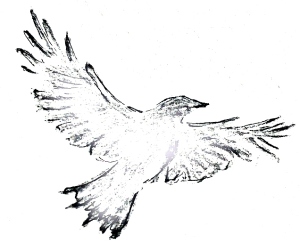 an expostulation of crows
unceremoniously drowned out
by the lawncare quartet –
mower, blower, chipper, and saw

they cling to the high sawara
in hunched recrimination
thinking, I think,
much the same as I

The crows are still in the midst of molting (or moulting for my UK friends). So they’re looking a bit scraggly at the moment. Added to that, their numbers are increasing as a precursor to the winter roosting so I’m at the time of year when there are no longer just 5 or so following me about, but 15-20. Most walks consist of me, two dogs, and an abundance of bedraggled looking, very vocal crows. This morning I had roughly 10 walking in close formation behind the dogs – it looked like I had my own feathered army. One woman stopped her car, leaned out the window after honking at me, and said “they’re very bold, aren’t they?”

I’m very pleased that I can still pick Coyote out of the bunch and more often than not the two babies from this year’s nesting.

A little farther north, Sorrow is still around and still comes swooping in for treats. He’s always been quiet for a crow and doesn’t demand or cluck or scold like Coyote does. I haven’t seen Mirth for several months now and I have to believe that either he’s gone his own way apart from the flock or he’s simply no more.

I’m enjoying my strange friends while I can. A move is on the horizon for me so I’m afraid my time with Coyote and his brood and with Sorrow is limited. I’ll miss them more than I probably ought to – silly, sentimental me – but will appreciate their raucous company while I still have it.

a truth-teller follows me,
skating from tree to tree

this morning his black
is ruffled by a stiff wind

and his message is more
raucous perhaps as a result

but even on quiet days
it is much the same

when he sees that I
finally get it

Has it been a while since I’ve given a crow update? It has! There are signs that Coyote and his mate are nesting, but it’s not in the same spot as last year’s nest. Knock-Knock (last year’s offspring) has made himself scarce again lately – no doubt exploring the world. Coyote seems to have accepted the boyfriend and has even approached him when I’m not there once or twice.

The relationship between Coyote and Freyja-dog is an interesting one lately. Freyja knows not to chase the crows (but will chase pigeons!) and I think the crows have learned this. But lately Freyja has wanted to play with Coyote and engages in the typical doggy play invitation stances when she sees him. A couple of times, Coyote has crouched and hopped closer and then away as if teasing her. Crows are completely capable of play and I’m halfway wondering if he’s recognizing that’s what my odd little dog wants to do.

Had a lovely (albeit very breezy) breakfast on the side porch yesterday morning with Coyote for company. I managed to capture a video on the tablet of him asking for treats. About midway through, we get interrupted by a neighbor (who gave me very odd looks for clucking at a crow) and I had to pause until he went away, but you can see Coyote get anxious.

how must I look – this graying
Botticelli who walks with crows
in a constant spray of black cawings,
a dark-feathered wind I would not dispel

one is for Sorrow, two is for Mirth,
and the bursting laughter of those first
brought the flock that now follows glossily,
seeking tidbits from one who says “well hello”

but oh, how the superstitious must
inwardly flinch (irrational reflex!)
and it’s funny to me how a feather can
so clearly draw a divide between them and me

pshaw! and caw! to all of you fragile-minded
things – flightier even than crows –
they are a gift the same as my mad curls and I
will revel in them both for as long as life allows

My mom insists that I ought to write and illustrate a children’s book about the crows that have adopted me. Truth be told, I’d already had a few half-formed thoughts about that before she mentioned it. Trouble is I’m an impatient sort of artist – I want to feel the immense satisfaction of completion before I’ve put the proper amount of effort into it I think. The result of course is sloppy art. Ha! One of these days I’ll put down a few sketches and see if I can muster the enthusiasm for such a project.

In the meantime, I do sometimes wonder what sorts of thoughts are going through the minds of the people who have given me odd (or yes, even shocked) looks when walking by the entourage that is me, two dogs, and anywhere from 2-12 crows (depending on time of year). 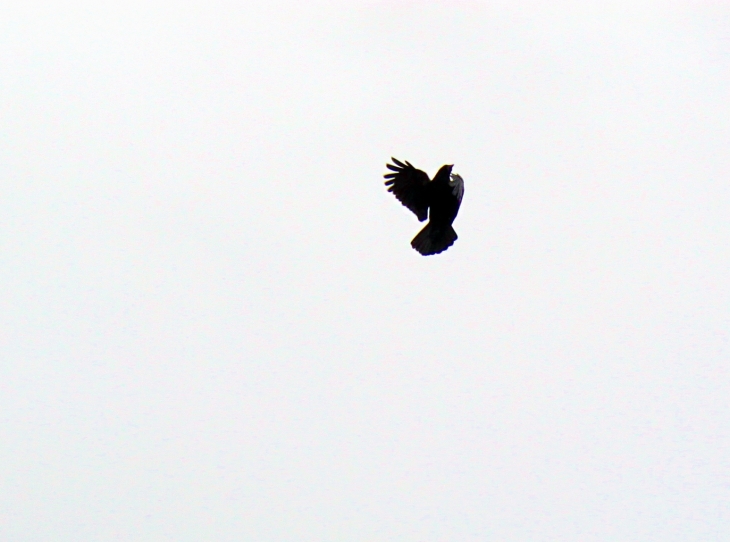 Because I can. And because I am in love with this picture, which is one of a series I took and plan to frame and hang on the walls. If I were a good little poet, I’d come up with a companion piece, but sometimes the picture is the poem.

For those of you who maybe haven’t clicked over to my photo blog before, clicking the photo above will take you there. Like magic. You should go – really. Especially if you like crows. And dogs. And poking fun at the amateur photographer.